From the base of traveling to our dear travelers, over? Well, we hope you are around because you are about to discover something super new about top 10 mind-blowing caves in the world.

If you are already packing and have already made up your mind about your destination, then go ahead and read our article, as you might find that some of these caves are, in fact, on your way or in the heart of your destination.

To get to some of these caves, you might need private guides to give you a tour inside and outside these places. You still can get to your destination by air travel, but road trips might be the only way to get to such caves.

Most travelers are interested in promo flights, super cheap plane tickets and travel insurance to secure their vacations.

But you can think outside the box and focus on something more worth it, perhaps, about the real places you can see; the ones with which you can mark your journey and occupy a whole part in your travel journal. By the end of this article, you might find out that you are quite fond of caves.

The Blue Grotto, Capri in Italy 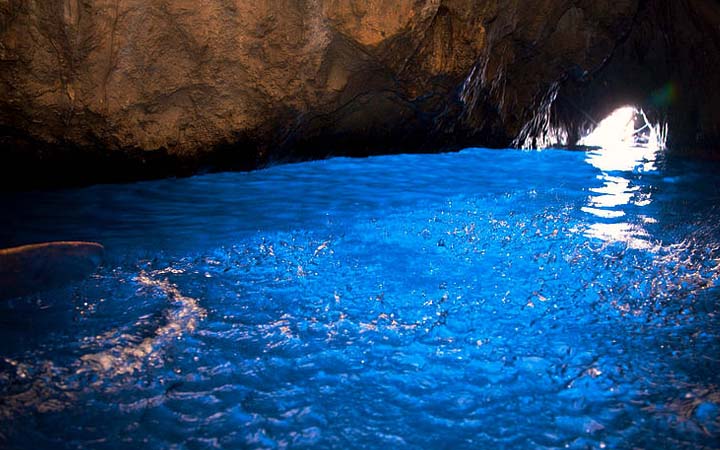 One of the most gorgeous countries that mark the history of the European continent and of Christianity is Italy. The rich tales about this country are too many to narrate, but there is one saying that summarizes the greatness that Italy once had which is: ‘all roads lead to Rome’.

If you are by any chance in Italy thanks to the active vacation packages you got, don’t forget to step by the Blue Grotto cave. It is located on the Capri Island, which is one of the most visited sites there.

What is greatly unique about this cave is the blue glowing color that sparks form the entrance and an underwater hole. It is enough to look at the picture of this mesmerizing place to be convinced to visit it.

The Cave of Crystals, Chihuahua, Mexico 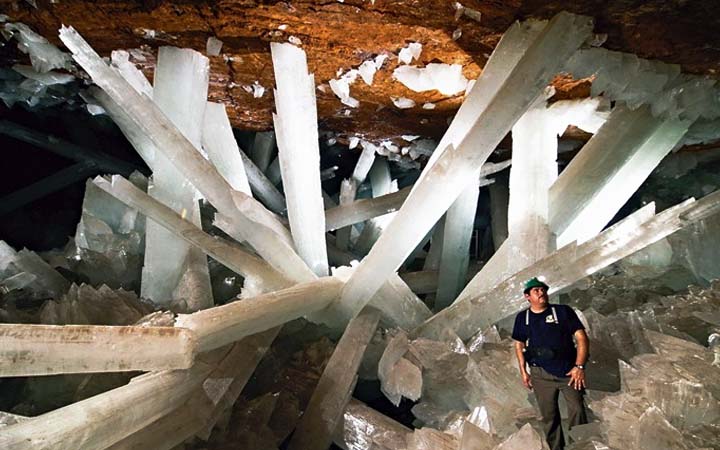 Did you book your flight to any close place to Mexico? If you did, you might get the chance of visiting the Cave of Crystals in Chihuahua. Before this cave was discovered, another one was unveiled back in 1910 by the minors.

The then-discovered cave is named the Cave of Swords. The Cave of Crystals in question was discovered in 2000. It is mainly filled with a large number of selenite crystals, decorating the cave naturally.

The humidity inside the cave is about 90 % to 99%, whereas the temperature is in between 50 and 50 degrees Celsius. Given the heat that the human body can be exposed to, this is one of the caves which is not fully explored.

The relative period of time during which you can stay in the cave is 30-45 min. This is a record timing which can be only accomplished while you are wearing protective gear. But you still can see at least parts of the cave from the outside. 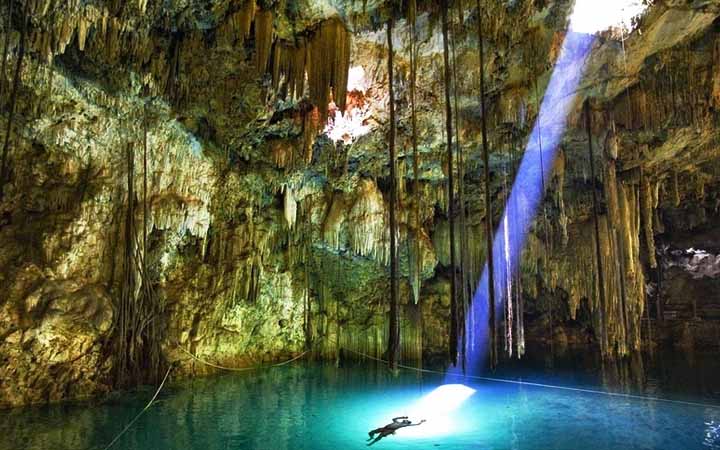 The best journeys are the ones which are considered as cultural experiences. But what does this mean? It means that you kick off your travel to learn about the other culture; under the umbrella of culture, you can find several categories, that range from architecture to nature.

Yes, landscape and nature are also geographical aspects of cultures. Speaking of nature, if you have found any good flight and hotel deals in Georgia, you might consider visiting the Krubera Cave.

This is deemed to be, according to empirical studies conducted by experts, one of the deepest caves worldwide. It was first discovered in 1960. This place is named after the famous Russian geographer Alexander Kruber.

We are sure that a vacation in Scotland will make you forget about the traditional definition of going on vacations. Scotland is a known place for its history and its outstanding nature.

If you manage to find luxury vacation rentals somewhere in the countryside, you are going to love there for sure. Since you will be around, perhaps, paying a visit to the Fingal’s Cave will be worth it.

The cave in question is located on Staffa, which is an uninhabited island. The form, size, and sounds inside the cave give the impression that you are inside a cathedral. The appellation dates back in history to the hero of one of James Macpherson’s books. It literally means the ‘White Stranger’. 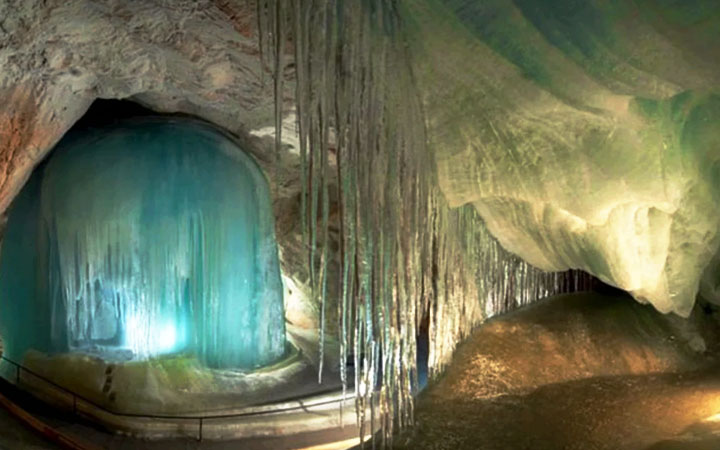 It could be claimed that flight reservation in winter is easier than it might be in summer. It could be due to the fact that most people like to travel in summer instead of winter.

Well, it is time to opt for something out of the framework of the traditional rules. In winter, low-cost airline tickets might more available than they are during the peak traveling seasons.

You might get a cheap ticket to Austria and be there in October or November to enjoy the natural uniqueness of the country. Along with this, you might step by the famous Eiseriesenwelt Ice Cave in Werfen. Each year, about 200,000 tourists visit the cave.

Thanks to the Salzach river, passageways were eroded inside the cave. The ice formations remain safe even during summer.

Most travelers who are interested in visiting the Philippines find good flight deals, and sometimes, even cheap business class fares. The Philippines welcomes every year thousands of tourists from all over the world.

Some of them are interested in history, others in foods and nature. But there is one place in the country marked as a tourist site par excellence, it is the Puerto Princesa Subterranean River.

This is enlisted as one of the UNESCO’s World Heritage sites. The river is located inside a cave with waterfalls created by the named river. Having one tour inside the river is going to be your ticket into a whole place of rocks, bats, river channels and holes. You might get the chance to walk inside the four chambers, existing inside the cave. 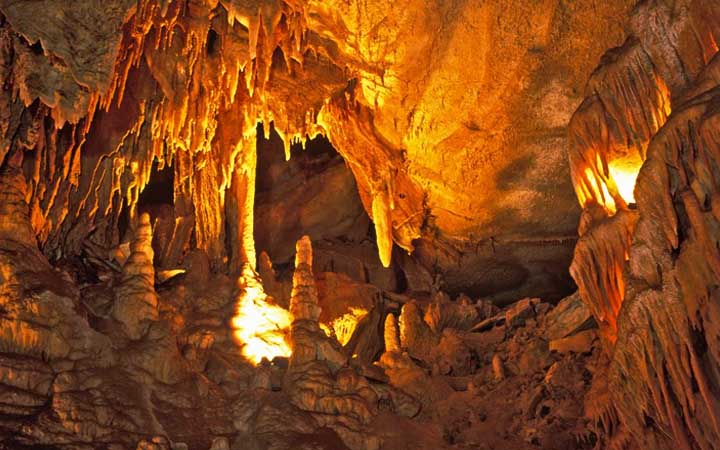 It is pretty useful to check travel booking websites every now and then; you certainly can find an offer or deal hiding here or there. If you are living nearby Kentucky, you definitely need to see the Mammoth Cave National Park.

This is not just a cave, it is a whole system of caves which cover 528.3 square kilometers. You can tour the cave with some guidance to scrutinize at close range the Grand Avenue, the Fat Man’s Misery and the Frozen Niagara.

Usually, people spend six hours touring the cave nonstop. This is, in fact, the limit time. If you want to try something more interesting and include it in your adventure travel experience journal, try the adventurous touring offers. 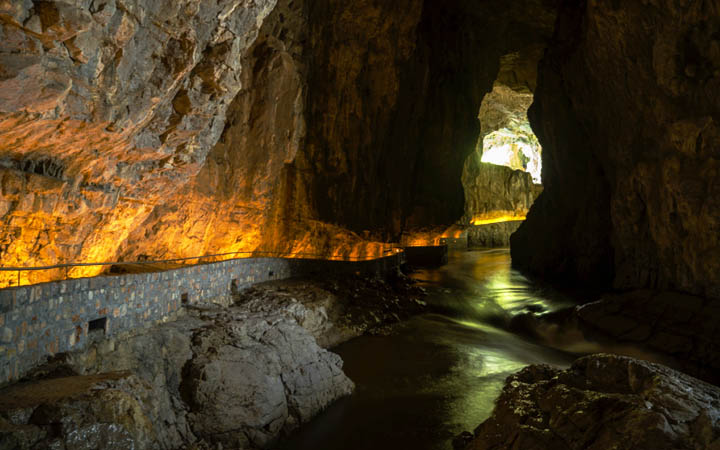 If your next destination is Slovenia, you are strongly recommended to visit Divaca where you can see at close range the one and only site that marks the geography of the region. It is the famous Skocjan Cave which is on the list of the UNESCO World Heritage Sites.

According to specialists and experts of geology, the cave in question is one of the genuine earthly treasures and one which is naturally formed.

It is basically an underground canyon, hosting a massively rich ecosystem. Based on experts’ studies, the cave used to be the home of the people who lived in the prehistoric times. 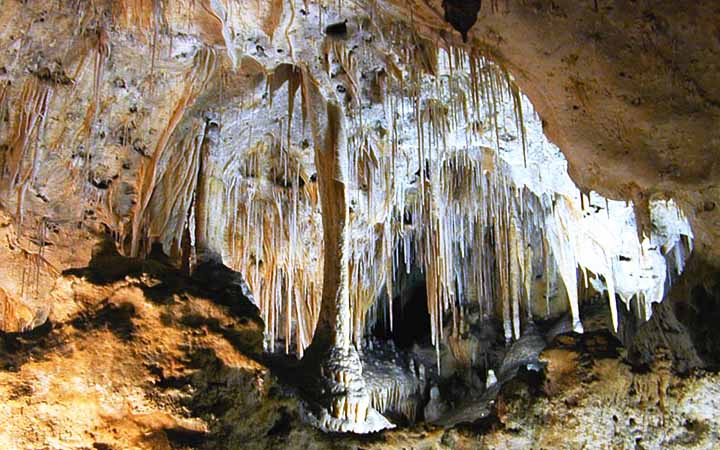 It seems that the US is far richer in terms of natural sites than we have thought or expected. Even if you are an American, you will likely need years to explore every single part of the country. Think of starting with the Carlsbad Caverns National Park.

Here exists a number of caves deep inside the rock of the Guadalupe Mountains. Back in 2011, the cave welcomed about 41 million visitors, which is already a record number, that marks the visiting register of this natural site.

Inside the cavern, walk into the ‘Big Room’ made of limestone in a naturally breathtaking way. This chamber is by all standards the largest one in the US and North America as a whole. 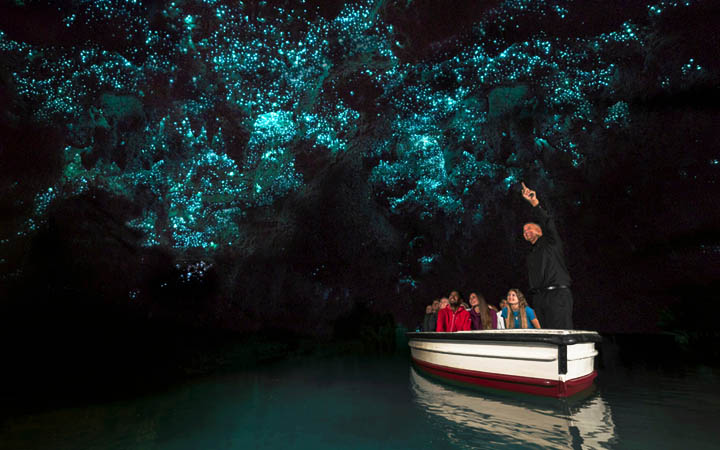 If you are to ask a travel booking agent about the most peaceful destinations in the world, where you can experience spiritual tranquillity, s/he would likely recommend New Zealand. If you are seriously thinking of visiting this country, make sure you go visit the Waitomo Glowworm Caves.

By walking into the cave, you will be taking your first steps into a galaxy of lights made of glowworms. They can be found all over the cave. The guided tours are available sometimes at low prices.

You can set about the tour with a ride on a boat inside the underground river. Look up, you will be able to see a sky with stars’ like lights up there.

Don’t forget to take cash, dollars if you are in the US and other currencies given the country you are in. You can carry also a credit card with you just in case you want to withdraw money from an ATM in the city.