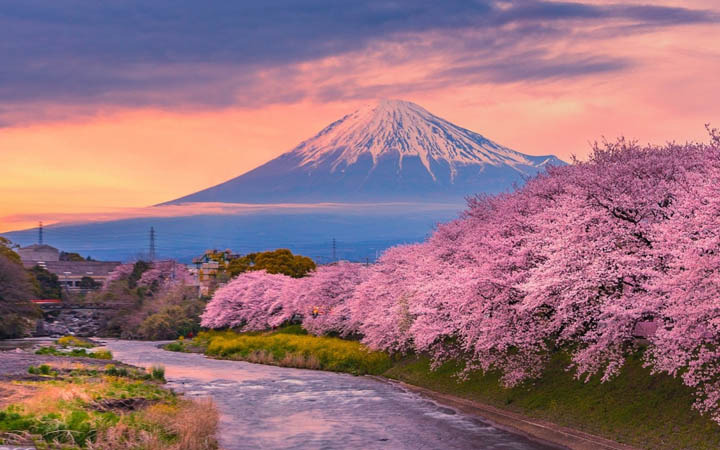 Last year, Tokyo was dubbed “the best travel destination” by the 600,000 readers of Condé Nast Traveler magazine who took the annual survey.

The Condé Nast Traveler is a luxury and lifestyle travel magazine that has been distinguished with a total of 25 awards, making it one of the most important magazines worldwide in its category.

The reason behind this choice is not exclusively related to the wild mix of tourist attractions that range from incredible urban and natural landscapes to tasty Japanese food. There’s another rather more important factor: the Japanese culture.

Western people have long been fascinated by everything that comes from this island country in the Pacific. In the last decades, Japanese pop culture has gained a lot of traction, with people from all over the world consuming things like anime, manga, and Japanese video games.

Similarly, there’s probably a Japanese restaurant somewhere in your city, or at least a restaurant with tempura, sushi, or noodles on its menu. This cultural intersection has sparked the curiosity of tourists everywhere.

Given its location, it is not easy to find cheap flights to Japan. But if you lurk around those websites designed to find cheap vacation packages, you can usually find good deals and book a relatively affordable all-inclusive vacation (especially if you travel off-season). Trust us, it’s well worth the money.

There are countless activities to do in Japan. But if you need some more specific reasons to visit Japan, here are 6 different ones that will make you book a trip right now. 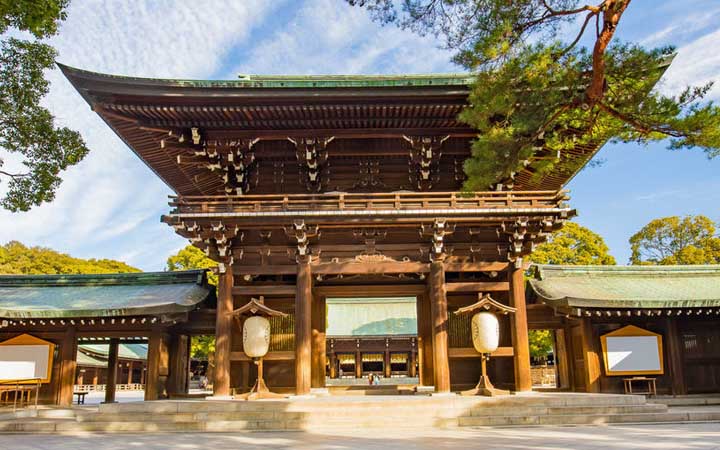 There’s a lot to explore besides the bright lights and skyscrapers of downtown Tokyo, and the Meiji Shrine is the perfect example to back up that claim.

It started being built in 1915 in honor of Emperor Meiji, who had died three years earlier. The construction took several years to be completed, and the original building was to be completely destroyed during the Tokyo air raids of World War II.

The new shrine was rebuilt shortly after and it is impressive how such a peaceful and scenic place exists right in the middle of Tokyo. This is due to the fact that it is surrounded by the 70 hectares of Meiji Jingu’s forest with over 100,000 trees. The Meiji Shrine is a mandatory stopover for those visiting Tokyo. 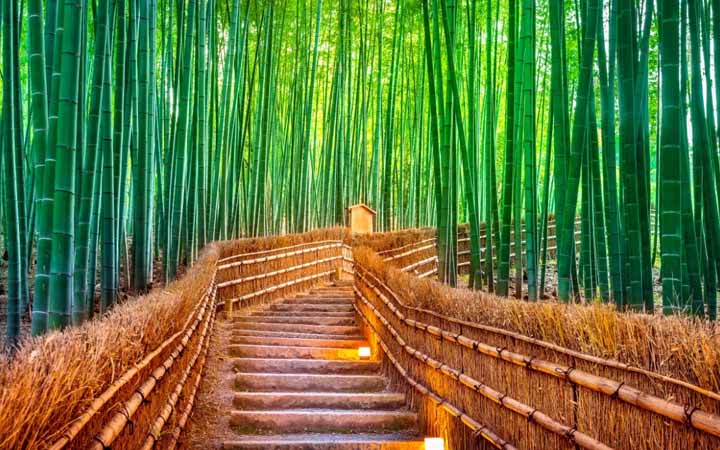 Located in the outskirts of Kyoto, the Arashiyama and Sagano district is known for its lovely natural landscape. If you have always been attracted to the vivid colors of Japanese natural settings, the best time to travel to this location is during the cherry blossom and fall seasons.

In addition, there is also the famous Arashiyama and Sagano Bamboo Groves – a bamboo forest with pathways built for visitors to enjoy a long walk or bike ride.

You’ve most likely come across photographs of this place, where the sunlight penetrates with trouble the tall bamboo trees. But you need to walk those pathways to fully capture the beauty of the place. 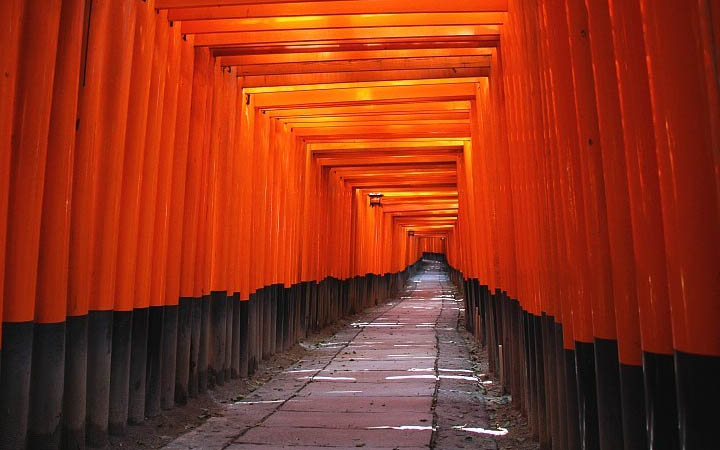 Another well-known shrine is the Fushimi Inari-Taisha in Kyoto. With part of its structure built in the distant year of 711, this shrine is known for the long dense rows of torii gates – the typically orange and black frames that signal the approach to a shrine.

If you like to hike and don’t mind a 45-minute ascent, you can reach the Yotsutsuji intersection to enjoy a nice view over the Kyoto district. It’s great physical exercise! 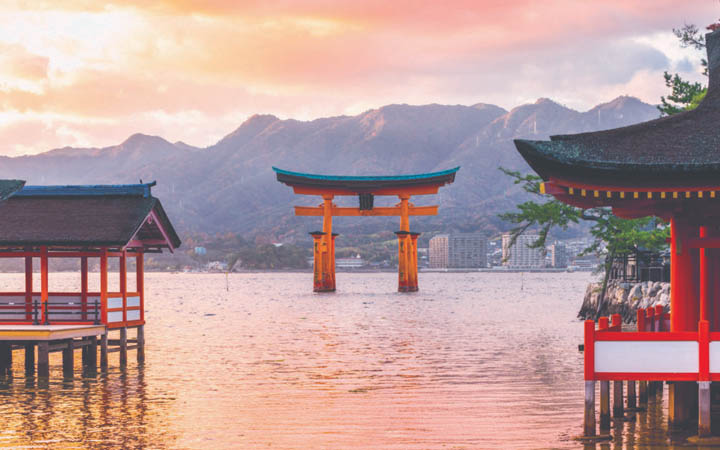 Popularly known as Miyajima Island, Itsukushima is a small island in Hiroshima Bay. The torii gate that rises above the water to welcome visitors to the island is one of the most iconic landscapes in Japan.

This is a lovely place for a romantic escapade. You can take long walks to explore the different hiking trails and visit a couple of shrines and temples on the island.

With a population of about two thousand people, Miyajima Island is a peaceful location that allows tourists to relax and recharge batteries for the rest of the trip. We all know how tiring it is to be on a vacation. 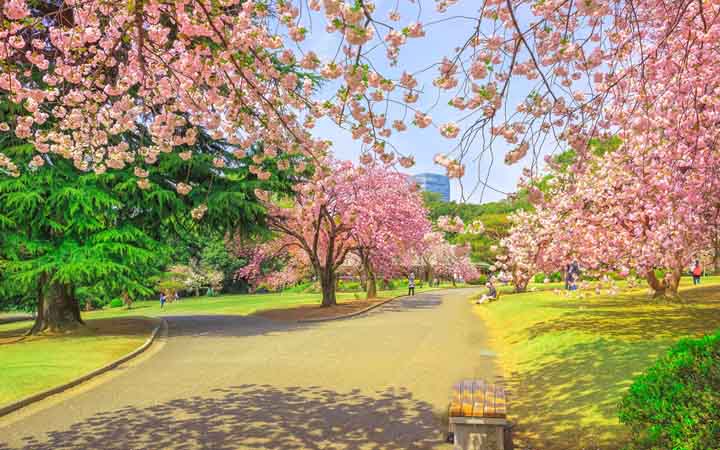 Now, let’s go back to Tokyo! The Shinjuku Gyoen is a public park that reopened in 1949 after being wrecked during World War II. Its landscape has made it a typical postcard from Japan.
It covers over 58 hectares of area and merges three very unique garden styles: formal French, English landscape, and Japanese traditional.

Since there’s so much to see and different environments to chill in, we recommend you to save at least an entire afternoon to fully enjoy the park.

If you visit this location between late March and early April, you will have the privilege of seeing hundreds of cherry trees wonderfully blossom in the park, painting it in shades of pink. 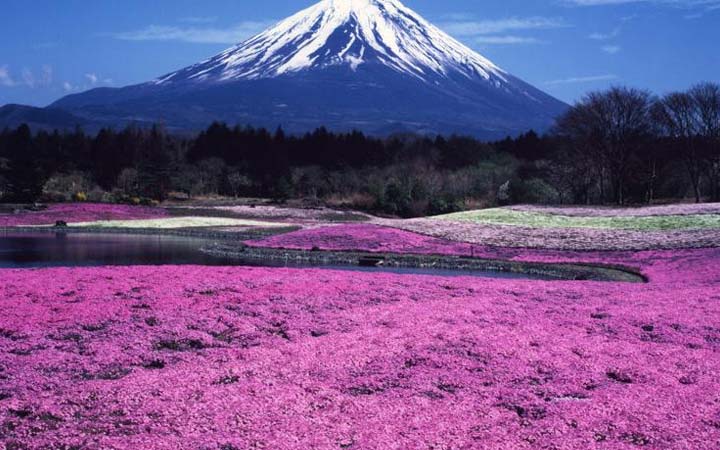 There are five lakes located across the northern half of Mount Fuji, which is commonly known as “Fuji Five Lakes.” They were all formed from eruptions of the Mount Fuji volcano, and the Lake Motosuko is only the third-largest in terms of area.

This location offers one of the most beautiful views of Mount Fuji, so much so that it was featured on a 1000-yen bill. The diversity of landscapes in Japan is fantastic: this underdeveloped site is just two and a half hours away from Tokyo and is great for camping, hiking, and fishing.

One last tip: when looking for hotel rooms in Japan, try to book your accommodation somewhere with a traditional Japanese-style. These are called Japanese Tatami rooms and even though they are becoming less common, you probably have seen this specific interior design in movies and other media. It’s a great way to completely submerge yourself in Japanese culture.