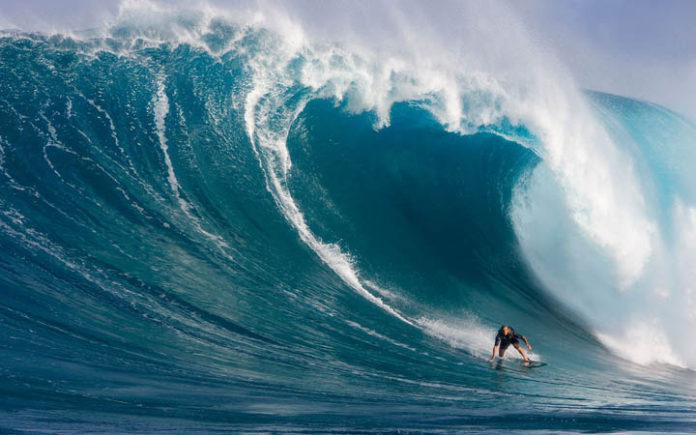 Some people are only born to be adventurous and wild. They choose to defend mother nature and even defend death only to satisfy their crazy passion, quench their thirst, and refresh their souls!

Therefore, they decide to travel to the world’s deadliest spots where they can take a dip in the deepest dark blue oceans that have the heaviest and deadliest waves ever!

No one can actually deny that big wave surfing is one of the most dangerous sports on the entire planet. Hence, these surfing spots are only suitable for those experienced surfers. It’s true that these waves can only break once in a while, but they are capable of killing a rider in no time!

Chasers of giant surf are every day pushing the limits of human capability in their quest to conquer the ocean’s most formidable swells.

Mentawai islands are a collection of 70 islands and islets that are located 150 kilometers off the western coast of Sumatra in Indonesia.

The islands and its people were kept isolated from the rest of the world for about 20 years because of the islands’ unpleasant weather which is characterized by strong winds and unpredictable razor-sharp reefs. Today, Mentawai Islands are considered to be one of the best surfing spots in the world.

If you are craving to ride huge weaves, then, we recommend planning your vacation and booking a ticket through the months of June and September if you really want to experience the thrill of catching big swells. Also, one of the best spots where you can catch those monstrous waves is Siberut, Pagi, and Siparo.

The big waves are not the only thing that distracts your attention there, but also the breathtaking natural scenery and landscapes. A trip to this beautiful destination is definitely worth your money! 9

Banzai Pipeline is widely known as The Pipeline.The latter is the United States most popular surfing spot that is teeming with professional surfers, experts, and also daring, adventurous souls!

The best time to catch and ride huge waves is during winter at this time of the year is said to bring one of the most dangerous waves ever!

In fact, The Pipeline Beach has one of the most dangerous and giant waves on the entire planet and where best surfing competitions take place, including the Pipeline Bodysurfing Classic and The Billabong Pipeline Masters.

Before planning a trip, you should keep in mind that the waves there are deadly, which means a mistake can cost your whole life. Scary enough, the average waves at Pipeline reach nine feet and have killed many people before! 8

Mullaghmore head in Ireland is known for its big, strong, and fast waves that can reach 20 to 25 foot. This number can even double during the month of March, especially if the weather is stormy and not really stable.

This beach is definitely among those with the best and biggest waves in the world as the largest recorded wave was about 50 feet high! 7

Don’t be fooled by the quietness of the place, Teahupoo village is famous for being the world’s most dangerous break with loud and heavy waves that have a unique combination of size, power, and speed, often reaching 23 feet.

However, we think it is important for you to know that These scary waves have the power to rip your face off and your boardshorts too! Even worse, this beach is teeming with sharks that can attack you in an unpredictable timing! We know, it is not scary but bloody terrifying!

Welcome to Shipstern Bluff or the Devils Point as it is often called by tourists and people around the world! This place is located in the southeastern of Tasmania in Australia and it is famous for its notorious breaks. For this reason, it is called the Devils Point!

If interested to arrange a trip soon, keep in mind that to get there, you will only have two options to take! Let’s say you can either choose to take a trip by boat or hike for one single hour through the Tasman National Park.

There are many ways to die and one of which is surfing Dungeons. The latter is located near Hout Bay in Cape Town. It is famous for its giant waves, icy-cold waters, and deadly white sharks! So, you can say that it is the perfect death zone for those who are daring enough to ride!

This beach is also characterized by its unexpected and unpredicted waves that often hold waves 40 feet or even larger and the best time of the year to catch these waves is during the month of October.

However, think twice before you decide to book your ticket and head to this destination! Once you get there, dying will no longer be a choice but your fate unless you are too strong to fight for your own survival!

Not so much different than Dungeons, Mavericks is definitely one of the deadliest spots on earth where you can catch the biggest waves ever! This beach is only for those who have the essential skills to ride the deadly waves and compete with them.

The waves in Mavericks can reach over 60 feet, but normally, they come in 25 feet. They are too strong and very sharp that they can even be recorded on the Richter Scale.

If you are craving to experience one of the most excellent left in South America, then, you might want to consider taking a trip to Punta de Lobos in Chile. What’s good about this beach is that you don’t need to be a professional surfer to ride the waves.

However, when the waves get huge, they can be as high as 20 to 30 foot! So, you might need to stay out of the water as they can hit you hard. Don’t say, we didn’t warn you!

Believe it or not, the waves in Praia De Norte are not just huge but so massive that’s why this beach is attracting surf experts from all over the world, especially during winter.In fact, Garrett McNamara, who is an American professional big wave surfer, rode his biggest wave which was about 100 feet or so, at Praia De Norte.

If you are looking for a lifetime experience, you know well when to book your flight ticket and where to spend your next vacation! 1

Waimea Bay is located on Oahu’s North Shore and it is famous for being the most beautiful wave beach in Hawai. This beach host many international competitions and the most important one is the annual Quicksilver Big Wave Invitational. The waves at this particular beach are described as big, consistent, and beautiful!