Meanings of beauty vary as people do in races and colors, each and every single person has got his or her own definition and feature of beauty. In fact, what you might perceive as a flaw or defect is actually the genuine beauty for somebody else somewhere in this wide universe.

In really simple words, there is no such thing as one unique or unified beauty, but rather beauties. We have compiled a bouquet of various things which embody beauty and attraction in many parts of the world, that for a second would seem absolutely weird and strange.

So get ready to discover some of the oddest definitions of beauty in 10 places around the world, maybe, you can share with us some of yours inspired by your original cultural identity.
ADVERTISEMENT
ADVERTISEMENT 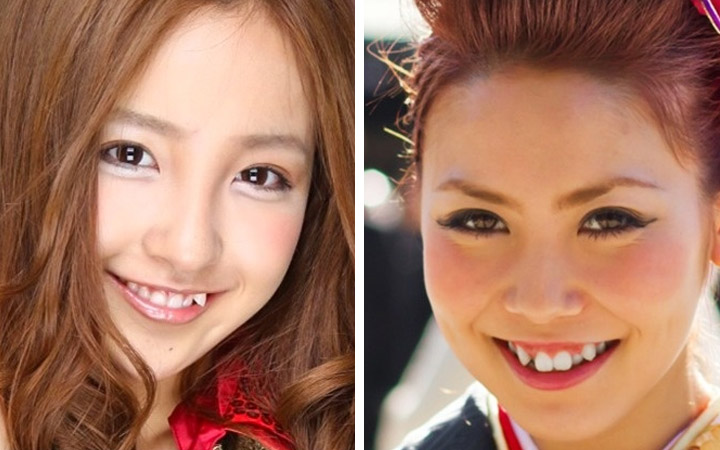 Forget about the Hollywood smile thing common in the west with even teeth because, for some, that is not the PERFECT smile. In Japan, for instance, if you got crooked teeth, then you are a lucky one. Wondering why? Well, having crooked teeth gives a rather cute-looking to the person.

Many people worry about having crooked teeth and force themselves to put those dental braces, whereas, in other parts of the world, it is a natural gift to celebrate and make one stand out of the crowd. 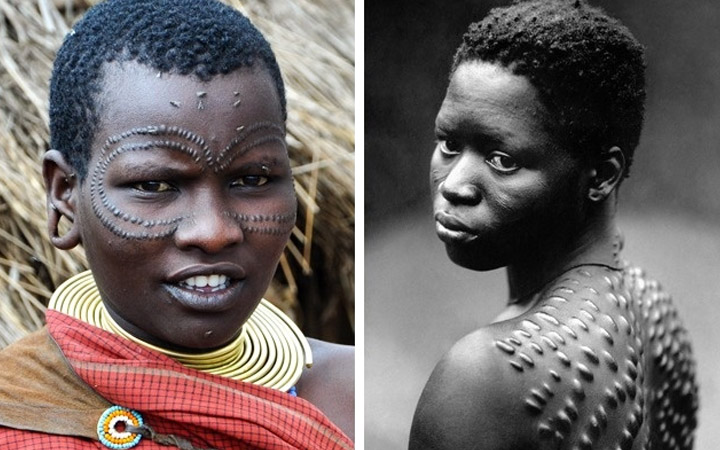 Have you ever watched one of those documentaries where tribal people got a lot of patterns and tattooing scars all over their bodies? Well, that is the case in places like Guinea and other neighboring countries.

Men are usually granted such artistic tattoos during ceremonial events, yet the story is quite different for women, as these scars and tattoos constitute the core of their feminine beauty. If you ponder upon such artistic designs drawn on someone’s skin, it will certainly remind you of what is known as body modification in more modern terms.

This form of art is for many a surfacing process of their inner thoughts of something or someone. It is a physical memory embodying one’s past experiences or even beliefs even though sometimes some would be endangered by having skin cancer. 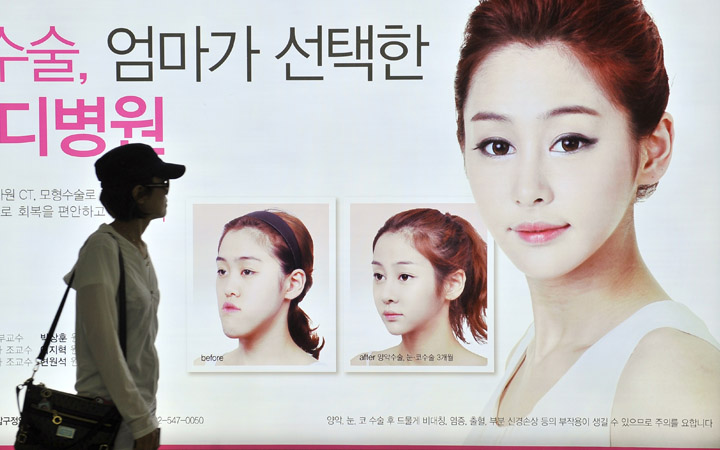 Have you ever noticed that South Koreans, stars in particular, look in a way alike? Besides, you would rarely find anyone in South Korea who has never had plastic surgery.

In reality, people have become obsessed with plastic surgeries; that is no surprise because advertisements in big cities, in particular, embolden to give it a try. There is one single thing any Korean perhaps would do anything to get: it is the Heart-Shaped Face which is for them the peak of facial beauty.

The operations Koreans go through just to get the heart-shaped face are highly complex, encompassing breaking the jaw-bones into nearly three fractions, getting rid of the central fraction and combining the two other parts together.

Hence, the patients will get one of those pointed chins that will be rendered later softer. But the end of the plastic operation is not the end of suffering, as one welcomes few more days of not being able to eat solid food. Do you really think that it is still worth it? 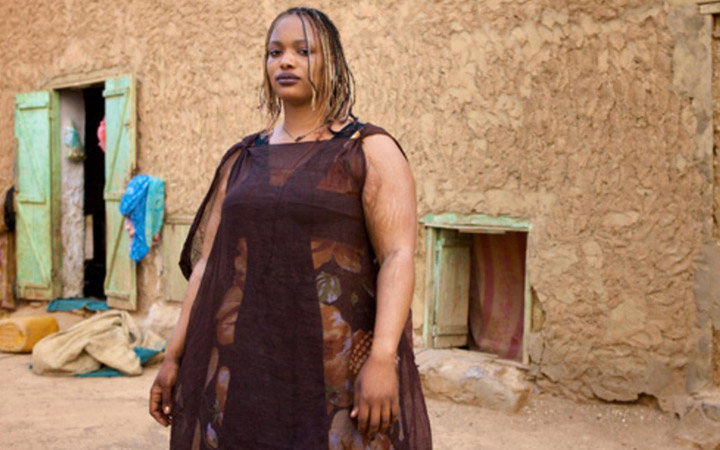 Mauritania, the land where skinny ladies have no room because this is where you can eat as much as you can without feeling guilty about it, for you are working on making your body more attractive.

This is almost a solid cultural tradition for the Mauritanians, otherwise, ladies will have no chance to grab men’s attention. What parents do is sending their daughters to particular farms where they should get about 16,000 calories per day.

This is a common practice in the Mauritanian community, but for some reason, they tend to give importance to the beauty of the female body at the expense of her health. It is good sometimes to give your stomach what it desires, but careful with portions.

For instance, some of the Mauritanian girls sent to those farms usually suffer from stomach illnesses as a result of the unregulated food portions they take.

Iran : Surgical Dressings On The Face 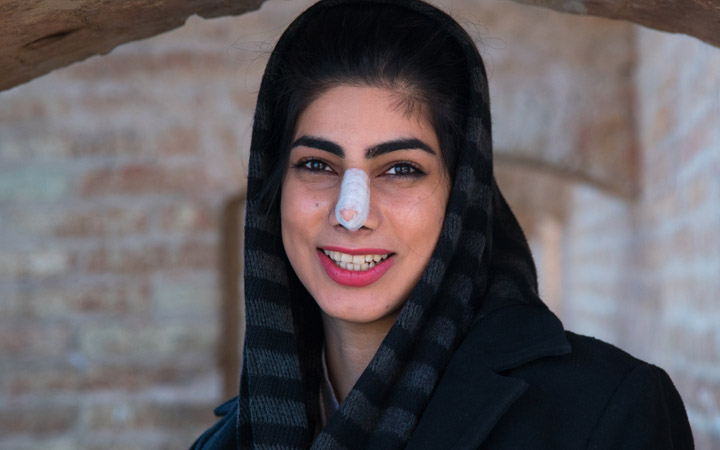 Here is another type of plastic surgeries for which people pay millions to have it; Rhinoplasty. Iran is known as the country where such an operation is quite common. What is basically wanted by the patients is a straight and attractive nose, not to mention that it will grant them rather high social status.

This might sound weird for a second, but be prepared for more odd things. People would fake having gone under a plastic surgery to fix their nose by putting on a surgical dressing to convince people that they actually had one. 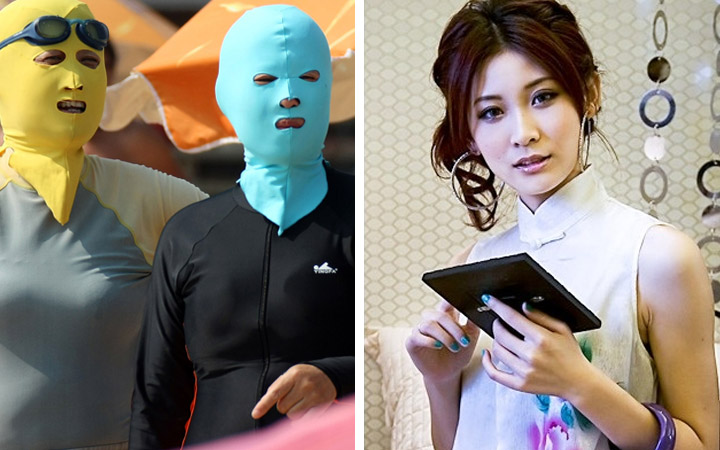 Usually, having a pale face is a sign of sickness, but in many parts of Asia, that is not something to worry about for if you have pale skin, you are leading the beauty league in those countries. It is also no surprise that face cream sold there do not include any bleaching elements.

This is, of course, goes for men and women alike; men usually have their face creams to be put after enjoying a nice shave. But this pale skin that many Asians like to preserve can be influenced by outside factors like sun rays; therefore and in order to protect their skin, a respective amount of Chinese people put masks on while being on the beach.

Chinese and Thai women believe that going to tanning salons just to get the skin tanned, as westerners do, is a crazy idea! 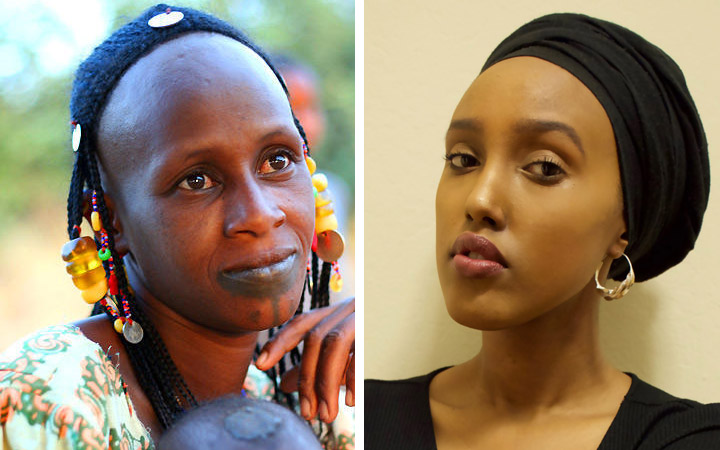 Somewhere in the African jungles, a tribe named Fula that considers the possession of high foreheads as a pearl taken out of the crown of African beauty. Some women are lucky enough to have them, but others go through a great deal of trouble hoping to get ones.

For this particular reason, ladies with their tricky sense tend to take off parts of their hair just to give the impression or illusion that they actually have a high forehead. This is not a Fule-specific practice for throughout history, medieval European ladies used to shave as much hair they could from the top of their head as well. 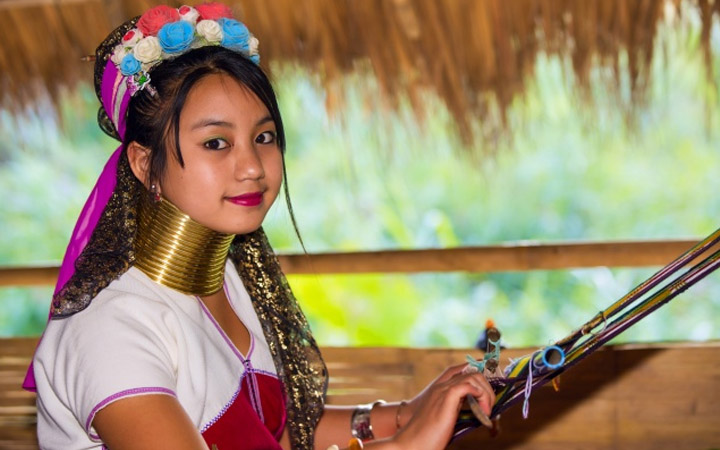 Scrutinizing the long and attractive neck of a giraffe must certainly incite an astonishing impression within you. In the eastern part of Burma exists a region named ‘The country of Giraffe Women’ or the Kayan people.

In this particular far geographical location, it is believed that women with long necks around which they wear brass rings are features of their feminine attraction.

Like any other tribal custom, this has got a legendary meaning ; as the people of this tribe have faith in the protecting powers of those rings, as the latter can shield women from animals like tigers, but the truth is that this mythical belief which is considered as the ground of such practices is not really true.

Hence, having women wear brass rings around their long necks is a matter of identifying themselves and distinguishing their tribe from other ones. 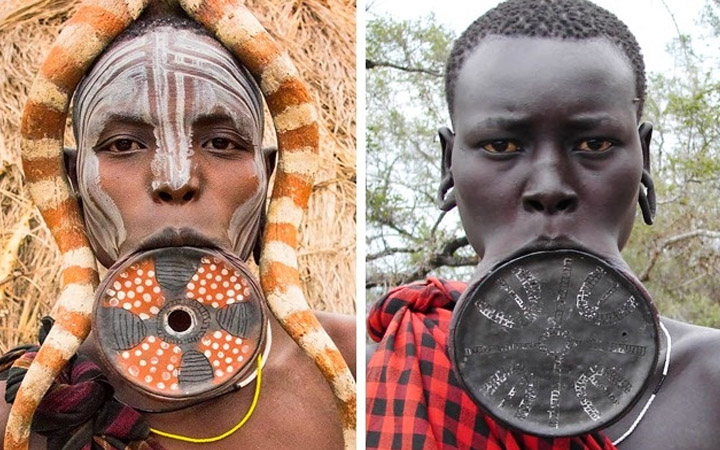 The powerful beauty of an Ethiopian girl is bound by her ability to stretch her lower lip. This procedure is decisive for her for, on one hand, it identifies her beauty among others and social status, and on the other, it impacts the amount of money she shall be having as dowry before her marriage.

To stretch their lips, the Mursi tribe girls in Ethiopia utilize a particular type of large disks. In another southwestern Ethiopian tribe, near the Sudanese boundaries, which are one of the tribes situated in the Fertile Omo Valley with about 20,000 inhabitants, they perform the exact similar custom.

Apart from having stretched lips to be seen as a beauty sign, red skin is also on fashion for the Himba, who are nomadic pastoralists, inhabiting the region of Kaokoland in northwestern Namibia.

To protect their skin from the sun, without being in need of a dermatologist, and giving them a rather red color, what they basically do is covering their bodies with red ocher and fat. 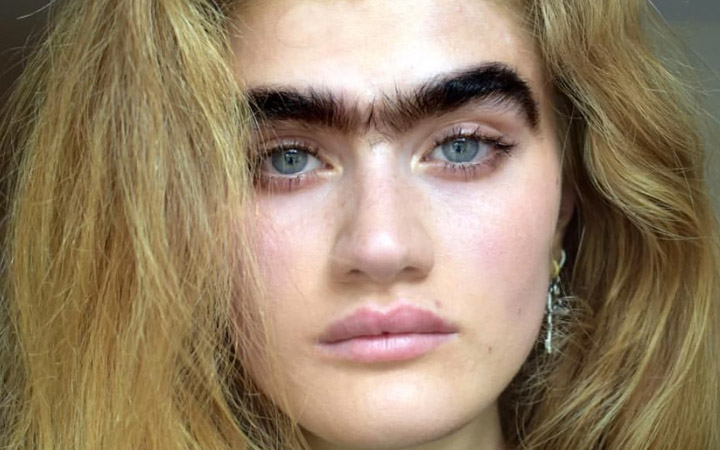 Some people might not be quite satisfied with their monobrows because they ignore the fact that having such eyebrows in a country like Tajikistan is considered as a beauty sign.

As usual, not every girl is endowed with this beauty feature, therefore, girls tend to resort to makeup tricks like drawing a line between their eyebrows. In their tribal sense, monobrows are not only a feature of beauty but also a revealing sign of the future, as they think that the one having such eyebrows is someone born under a lucky star.

What can be gleaned from this is that there is no specific standard to measure beauty; its conception and perception vary from one culture to another. Reading this must have brought up a train of thoughts and questions, perhaps curiosity to take a closer look at these weird practices in their communities of origin.

Take a moment and think of how pleasing it will be to join an interesting trip to one of these regions; a journey filled with discovery mixed with a flavor of adventure and, maybe, you will change your mind about what real beauty is. But remember something, with physical beauty, comes spiritual inner beauty too.