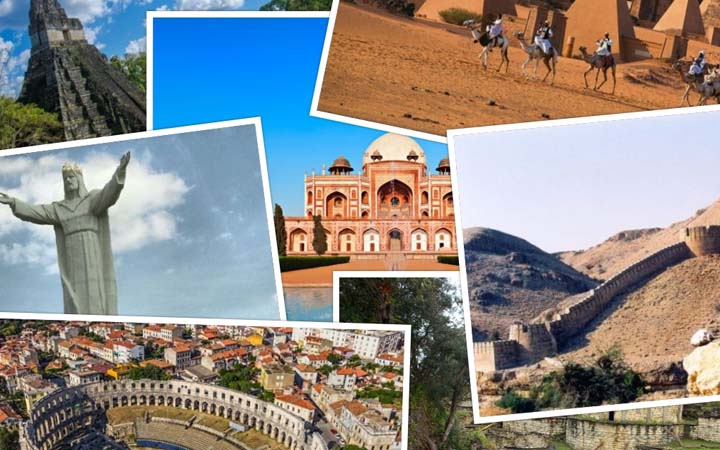 It all started with the Seven Wonders of the Ancient World. This list of outstanding structures of classical antiquity given by different authors has changed slightly since the 2nd and 1st centuries BC, and its current form was only established during the Renaissance.

Nowadays, there are several human-made monuments and natural marvels listed as the New Seven Wonders of the World, which are actually eight since The Great Pyramid of Giza was later added – it is now the only representative of the original list.

Travel agencies even created a special world tour that can take you to each one of these tourist attractions in just over a month. If you have the money and availability, this is an excellent way to see the seven wonders without having to worry about the logistics.

If you don’t, don’t worry. We have got you covered. As long as you have an internet connection, you can travel the world without leaving your home. Here’s how you can do it.

1. The Great Wall of China (China)

Some parts of this massive wall started being built over 2,500 years ago to consolidate and protect Chinese territories against nomadic groups. From then on, it grew into a complex series of fortification systems of immeasurable architectural and historical value.

It spans over 21 thousand kilometers (13 thousand miles) across the northern borders. This absolutely impressive dimension has given rise to a myth that the Great Wall could be seen from the moon. It can’t.

But you can see it and tread its most famous trails from your living room. The China Guide website designed an amazing online tour through the Great Wall of China, packed with historical facts and insightful information that you can check as you move along certain sections of the wall.

To start your virtual tour of the Great Wall of China click right here.

Everybody can agree that Taj Mahal is one of the most aesthetically pleasing buildings in the world. Built during the 17th century as a memorial to the deceased Mumtaz Mahal, Mughal emperor Shah Jahan’s favorite wife, this building is an absolute masterpiece that welcomes nearly 10 million visitors each year.

Thanks to Google, you don’t have to travel across the world to India to see it anymore.

Machu Picchu is one of the most beautiful places to visit on Earth. It seems like it came straight out of a fantasy novel due to the green vegetation coming out of the mountains, the clouds flying up close, and the dry-stone constructions.

This ancient city was built in the 15th century on top of the Andes Mountains (at an altitude of about 2,400 m) and abandoned soon after the Spanish conquest, a century later.

People rediscovered this magnificent historical site at the beginning of the 20th century. Since then, it has been restored and reconstructed to give visitors a more precise idea of what its original appearance was.

To start your virtual tour of the Machu Picchu without having to hike the Inca Trail, click right here.

No other amphitheater in the world is as famous as the Colosseum of Rome. Constructed in the heart of the Italian capital, this oval amphitheater could hold up to 80 thousand spectators on its prime time.

It was used for gladiatorial contests and other public shows (theatre plays, animal hunts, and executions, for example), and is a symbol of the power of Ancient Rome and the Roman Empire.

To start your virtual 4K tour of the Colosseum, click here.

Booking a flight to Rio de Janeiro is an appealing idea even if the city had no monument on the list of the New Seven Wonders of the World.

It has! Christ the Redeemer is a 30-meter high and 28-meter wide statue of Jesus Christ created by Paul Landowski. This sculpture is an international symbol of Christianity and perfectly displays the significance of Christianity for the Brazilian people.

You can’t enjoy Brazil’s amazing beaches, lively nightlife, fantastic climate, and welcoming locals from your living room. But traveling from home using only your computer allows you to see Christ the Redeemer and its amazing view over the city of Rio in full detail.

To start your virtual tour of Christ the Redeemer, click here.

Located in the Ma’an Governorate, on the southern side of Jordan, Petra is an archeological city that has attracted the attention of tourists for years. In 2019, the city received about 1.1 million tourists, a record that seemed unattainable after years of tension in the region due to the Arab Spring conflicts.

Grab your laptop, sit comfortably on your sofa, and start exploring this archeological wonder. If you have seen the film Indiana Jones, it will probably look very familiar to you.
To start your virtual tour of Petra, click here.

The Maya civilization is one of the most interesting and sophisticated civilizations that have ever lived. The Chichen Itza, a pre-Columbian city located in the Yucatán State, offers great insight into the lives of the Maya people during the Terminal Classic period.

The platform Stockholm360 created an in-depth online tour of this heritage site that allows people to see in great detail de main points of interest, as well as to know a little bit more about the history of this place and its people.

Of course, you can’t get a clear idea of the size and magnitude of these monuments through a computer screen. But the fact that we can get to know the world just through a handful of clicks is truly amazing.

To start your virtual tour of Chichen Itza without having to air travel all the way to Mexico, click here.